A thing of very little value or importance; a paltry, or trivial, affair.

My mother is an excellent cook. Everyone says this, I know, but I have evidence. She grew up in India, where for women, learning to cook is both a rite of passage and social obligation. While boys study math and science, young Indian women study food dyes, nutrition, and preservation techniques: the skills of future homemakers.

But knowledge becomes genius through necessity. After she was married, my mother moved to Canada. In the early 1980s, there weren’t that many Indian people in Canada, let alone Indian restaurants and grocery stores. It’s like if I moved to Mindat, Burma and found myself in the mood for a Krispy Kreme. Have you ever thought about making a creme-filled donut from scratch?

I didn’t know how spoiled I was. Our kitchen was overflowing with old-world recipes, made from scratch, and I wanted Kraft Dinner. Some of these recipes required bespoke spice mixtures known only to my great-grandmother.

That’s the reason that, when I was growing up, the Air India flights back home smelled of asafoetida and fenugreek. Stuffed deep in the carry-ons of homesick Indians was every spice you couldn’t find at Loblaws—along with tubs of ghee, boxes of mithai, and (potentially) a few thousand dollars worth of gold.

But my mother cooked more than just Indian food. One favorite from my mother’s repertoire of commonwealth desserts: the trifle. 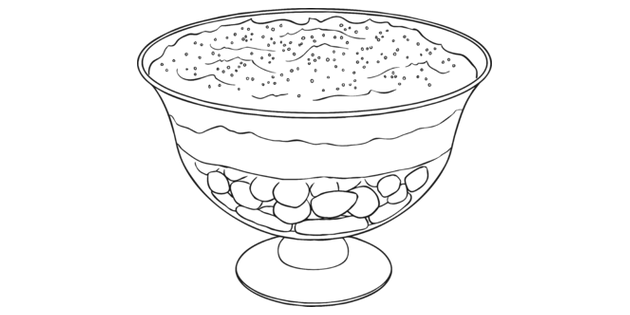 The word “trifle” comes from the old french term “trufle” meaning something whimsical or of little consequence.

The first trifles were like another dessert called the Fool, which you make by folding stewed fruit (gooseberries if you want be ‘tradish’ about it) into sweet custard. In the mid-1700s cake (or biscuits) entered the mix. The trifle as we know it, is referenced in the 4th edition of Hannah Glasse’s The Art of Cookery Made Plain and Easy, published in 1751:

Cover the bottom of your dish or bowl with Naples biscuits broke in pieces, mackeroons broke in halves, and ratafia cakes; just wet them all through with sack, then make a good boiled custard, not too thick, and when cold pour it over it, then put a syllabub over that. You may garnish it with ratafia cakes, currant jelly, and flowers, and strew different colored nonpareils over it.

For the very first immigrants to America, The Art of Cookery was an enormously popular book. Like my mom and her desi cohort in the 1980s, the early American settlers no doubt craved a connection to the foods they grew up with. The British book’s popularity even survived the the American War of Independence. (“Don’t tread on me but please send me the recipe.”)

It is also one of the first books in English to contain a recipe for curry: 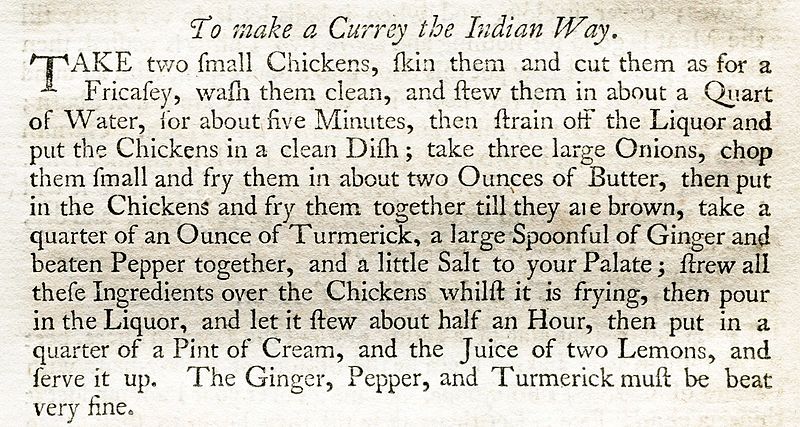 I would have gone with another Spoonful of Ginger

I haven’t tried Hannah Glasse’s chicken curry but my mom’s is probably better.

My mom’s trifle was a once-in-while thing. The kind of dish you make on a Saturday afternoon when you have company. A reason to bring down a certain glass bowl from its typically inconvenient perch. It’s an excuse to be extra. Instead of ratafia cake and currant jelly, my mother used ladyfingers, strawberries, and Jell-O. It seems a trifle is a bit more work than it’s worth, but it’s something.

I’ve never made a trifle myself. It seems I prefer to write them instead. This piece of reminisce about fruit and cake and custard in a bowl feels paltry even as I put it down in words. Should I be pumping out summaries of White Fragility on TikTok instead?

And yet. Guy Pascal’s take on the English trifle is an overnight recipe that calls for a mug of kirsch and access to half a vanilla bean. Maybe trifle is an oxymoron. Perhaps there is some depth to my mother’s layers.

Today the world is hard and we must work. And there is value in softness too. A bowl of ladyfingers, fruit, custard, and creme, stacked for the sake of it. A symbol of celebration. And community. And tomorrow. They’ll be here any minute.