I too was disappointed with the election results. Donald Trump, a businessman from New York and possible human centipede, won the presidency, but we wanted the other candidate to win. The next day I opened up my social media feed, and you all vomited straight Feels into my eyes.

Oh America, what have you done?!

I hugged a stranger today…

There were appeals to move to Canada:

And because it’s Facebook, there was a baby. (Congrats Tasha and Sean.)

But what made me sit down and write this, was this image. 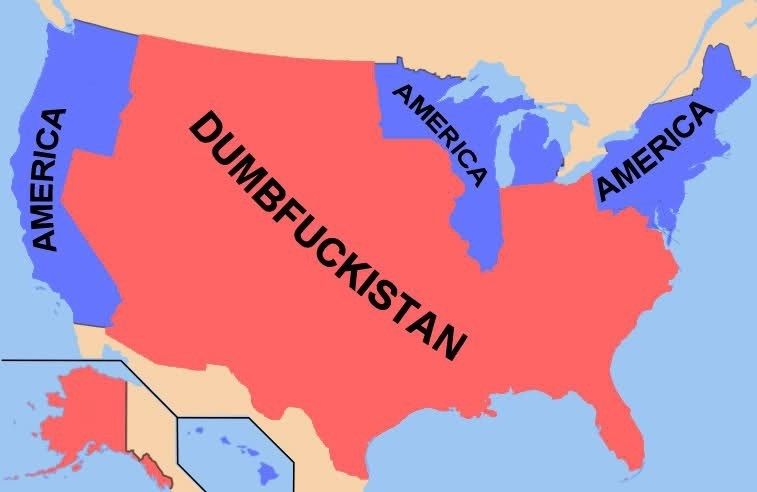 A map of America divided into two sections: America and “Dumbfuckistan.” This single image brings up a lot of issues:

I have a problem with this graphic, and for the purposes of this letter let it be a proxy for all the vitriol I’ve read so far. To be honest, my echo chamber friends, I thought we were better than this.

So look, The Thing That Happened on election night was a bummer but it was not a tragedy or the apocalypse or the end of the world as we know it. But even if it is (and it might be) what I’m mostly hearing is people villainizing other people for voting their conscience. Sure, we disagree with their choice, but that doesn’t make them bad people. Sure, the candidate that represents their party said reprehensible things on TV, but that doesn’t necessarily make those people sexist, or racist, or homophobic themselves.

And that is important so I will repeat it: just because you voted for someone with a particular point of view, it doesn’t entail that you embody all (or any!) of that point of view. This fallacy is called ad hominem, and it’s blowing up my feed right now.

How did this happen? Who voted for this guy?

A huge swath of this country. Even normal people. Just like you and me. Yes, really. They’re not all in the KKK. I assure you, if there were 50 million white supremacists in America, I wouldn’t have moved here. Here are some statistics.

“No, dude. All those people are goblin racists.”

No dude, all of them are not. And this might come as a surprise to us in the echo chamber, but there are racists, sexists, and xenophobes here too. People in liberal San Francisco (a modern day Sodom and Gomorrah let’s be honest), just passed this law, which means there are hate-filled dumb fucks all over this amazing country.

It can be easy to make make fun of the middle of the country (and fun too!), but real people live there and they voted for Trump for actual Reasons.

(Specifically they wanted hope and change; themes you might remember from 2008. Read this piece from Mother Jones; it’s way more interesting than anything I am saying here.)

“So what do you want me to do instead, you non-voting asshole?”

1. Calm the fuck down

Sorry if that’s tone policing or whatever, but just breathe.

2. Read some other news sometimes

An echo chamber is a lousy place to have a conversation. Reading alternative narratives is instructive, and it doesn’t automatically make you a turncoat. John Oliver watches Fox News — so you can too. I read the National Review and Politico and I’m not (completely) insane. Hell, read Breitbart (but like, sparingly) if only to get a glimpse into the stories and narratives playing out on the other side.

You’re not reading other things to change your mind — you’re trying to broaden it. Actively reading stuff you disagree with might help you better identify the bias and spin inherent in the stuff you already do.

3. Don’t be an intellectual bigot

There’s no other way to say it: the reactions I’m seeing on Facebook have been pathetic and childish. A few of the words being thrown around to describe half of the electorate:

Not only it is inaccurate to paint this many people with such a wide brush, it’s rhetorically dangerous also.

Political correctness is increasingly being used as a bludgeon on alternative ideologies. And before you compare me to Milo Yiannopoulos, this is not an endorsement of hate speech. When we drop a bomb like “bigot” it can shut down a conversation before it starts. (Which is the point of labels in the first place.) This is becoming a problem in higher education. Mention is being conflated with use and any ideologically challenging concepts are at risk of being shelved as hate speech.

Here’s reality: people say things that sound wrong or offensive to other groups of people, because different groups of people have different norms and vernacular. It that doesn’t automatically follow that having different norms or vernacular makes you a bad human. The principle of charity asks us to look through words to seek genuine understanding. When we don’t understand our adversaries we ought to try a little bit harder to do so, not smash in their skulls with semantic hammers. In a divided country, this is even more important. Yes, it feels good to label other people as trash humans, but “dumb fucks” didn’t cost Hillary Clinton this election—she and her campaign staff did. (2019 edit: And possibly Russia.)

Donald Trump sold a message that resonated with enough people to get him elected. It’s our job (if we care to see a different result in four years) to figure out why that worked. For that we might have to refollow some of the “deplorables” in our Facebook feed.

4. Embrace the boring part of politics

Without looking it up, can you name any of the following people?

How many did you get? I honestly don’t know all of the answers to these (except Joey Kramer on the skins), I’m just trying to demonstrate that the office of the presidency is only one aspect of government and voting is only one part of your responsibilities as a citizen.

There’s more to being an engaged citizen then checking off a box. And huddling with your pals the night before an election to cram on ballot propositions does not constitute civic engagement. If we actually care about politics (and not the politically-themed melodrama on Facebook and cable news), then consistent involvement is crucial. Get informed about the boring-ass-bullshit that comes along with good governance. It’s not all red, white, and blue balloons and applause breaks in speeches.

And here’s the thing: that local stuff is the stuff that has the most effect on your life. It’s the stuff you can actually change. You can call a senator! You can help a local law come to life! You can help rezone a parking lot! Yay! But literally no one cares about your opinion on US foreign policy, so cancel your subscription to Monocle already.

5. Acknowledge democracy for what it is

This one is going to be harder for people born in the United States because Americans seem to have an unshakeable hard-on for capital-d Democracy, but it’s not that special, guys. It’s just a framework for solving a coordination puzzle, namely, how do we make the myriad decisions required to operate a country, without holding a a referendum every time we need zoning approved, or a new tax enacted, or law repealed, or whatever.

Democracy is an ordinary, non-sacred, not-designed-by-Jesus-I-promise-you tool that happens to work better than other systems of governance (and most of us have only ever tried one). Is democracy perfect? Until human beings are, I don’t think it (or any system) can ever be.

But to those of you who feel cheated by democracy after this election, sorry, but that’s how it goes sometimes. Your guy or gal can’t win all the time. Sometimes your side loses. Someone’s side always loses.

Put another way: we vote on things precisely because we don’t agree on every issue. Democracy allows us to choose outcomes that make for the least unhappy people. I get it. This time it’s half the country and we want to take to the streets, but lets not pretend that these protests are about electoral reform. If Hillary Clinton had won, would you still be hitting the streets? What would you say/think about Trump supporters protesting if their candidate had lost?

In this case democracy worked.

Again, the only reason I’m writing this is, as upset as I was about the election results, I was even more frightened by the image of the country in two pieces. Us and them. That’s ugly. That how you foment civil war. Even if you don’t like your roommates, this is actually America. (Oh and this.)

Not pictured: AK and HI. The freak states.

I might eat these words when Trump sends me to a concentration camp, but look: it’s fear that makes humans do and think and say bad things. Fear played a role in why Trump was elected in the first place.

So go ahead and be sad and mad (and for some of you glad), but don’t be afraid of Trump. He’s just one orange man, and we’re millions of people. If we actually give a shit, and pay attention, and “werk bitch” (or whatever the tweens are saying right now) we can keep this country on track.

If we don’t, I’m actually moving to Canada because I’ll probably get deported by soldiers in Trump wigs.

That’s it. You can resume gnashing your teeth now.